You All Aren’t from Here, Are You? 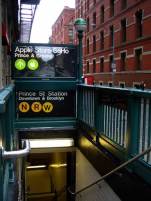 I’ve been going through pictures this week at my grandparents’ house. It’s amazing how vividly pictures remind us of stories. Often, they represent more than the thousand words everyone says they’re worth. One story in particular stuck out in my memory today.  It goes like this:

A young family visiting New York decided to take the subway rail-line downtown. The parents and their two little children were very excited to be exploring the big city.  They’d been on the subway for only a couple minutes when one of the two children, an outgoing 5 year-old girl looked up and said, “Daddy, can I talk with these people?”

The father, looking up and down the small railway car, could see no harm in her wandering the small enclosure, talking with people as long as she was still within sight. “Sure honey,” he said. In no time at all, the bright-eyed little girl was boldly tugging on the sleeve of a nearby commuter buried in his morning newspaper.

“Excuse me,” she said, “do you know Jesus?” The man glanced up from his paper for only a second before burrowing behind it again, ignoring her with a “Hmph.” The man’s unfriendly grunt didn’t douse her enthusiasm.  She simply went on to the next passenger and said, “Excuse me. Do you know Jesus?”

The little girl’s 4-year-old brother had been sitting quietly, watching his sister from his mommy’s lap. After a couple minutes, however, he popped up, thinking this was a great idea, and started working his way around the other side of the car. With big blue eyes sparkling inquisitively beneath a blonde, dutchboy haircut he softly drawled, “Excuse me, ma’am. Do you know Jesus?”

Some people responded with a “Yes, sweetie” or “I sure do,” others barely acknowledged the question or the presence of the children.  The peoples’ reactions varied but the children were motivated by their mission to talk with every person in that car.  The subject: Jesus. No pretense or reservations.  Just a straight-forward question.

An older man with white hair and a mustache leaned over to the children’s parents and said, “You all aren’t from here, are you?”

“No, we’re not,” the young father said smiling.

Flash forward to the present. This same family is singing and teaching about Jesus with four not-so-little children. Their audience grew, even as their family multiplied and grew up.

I was that little girl on the subway with my family. Yes, it’s been a long time since then but some things aren’t supposed to change in us; some things only get stronger.  Strangers on the subway in New York still need to hear about Jesus and you bet I’d still be talking with them if we were in the same car. Passengers on the MTR in Hong Kong hear the same message from the same little girl; elderly Chinese on the bus in Singapore have had the same enthusiastic child pray over them on the long ride home. If we were different people on the commute home with strangers than we were in front of spectators at ministry meetings, how real is our message? How real is our Jesus?

I look back and realize that New York was probably an appropriate baptism for sharing the hope of Jesus Christ in less-than-hospitable but desperately needy circumstances. I also realize how true it was what that older gentleman said on the subway all those years ago: we’re not from here. We’re not supposed to feel like we’re from here either. School, friends, jobs, even the mundane travel we undertake are all full of vital moments we can’t numbly wander through.  Our ultimate goal is to share the hope and love of Jesus Christ.

“If you can't explain it simply, you don't understand it well enough." - Einstein
View all posts by Brittany →
This entry was posted in Memories. Bookmark the permalink.

3 Responses to You All Aren’t from Here, Are You?