When I was a teenager, it was my dream to be a journalist. No fluffy, kids stuff for me. No self-proclaimed green-movement mumbo-jumbo either.  I’d planned for years that I’d be a tough, hard-hitting, Lois Lane type, writing Pulitzer-prize-winning articles exposing 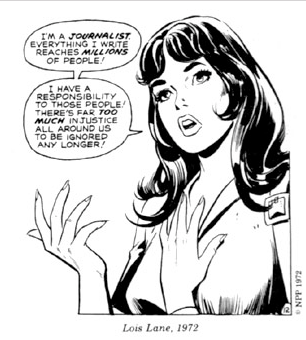 corruption so justice would prevail!  With that direction in sight, I started working as a reporter for my city newspaper while I was still under 20.  My life is very different now from what it was then but, for a time, I did the reporter thing, dressed in the cute little black heels and skirt suit, and even had those “inside sources” every movie reporter needs to get a juicy scoop.  Even still, all the movies I’d ever seen could never have prepared me to choose the right sources, words, and angles. I did well by the world’s standard but the world’s standard isn’t necessarily right, is it?

The biggest, most in-depth story of my brief, 3-year career in that field was also my last and centered around a piece of vacant real estate that used to be occupied by Total XPosure, a strip club that was closed down because of a prostitution bust a couple years prior. The property was auctioned off and the owner was “run out of town” essentially by zoning laws that prevented him from ever building or owning another establishment in Miami County.  The abandoned property was a prime lot with visibility right off the interstate and, even to this day has a For Sale sign plastered across the side. [And my life comes full-circle here: my family helped a local church by doing a concert on a flatbed  truck for people picketing the club’s opening back when I was 12 or 13 years old…  interesting twist] I did a lot of digging and discovered that this auctioned eye-sore became an acquisition of a real-estate investment group from Cincinnati.  The group had invested heavily in other ventures by the same slick Dayton area Club-Mogul that had established Total XPosure.  The Greek club owner wasn’t supposed to have any control over this particular property anymore but the investment group connection proved that he still had some stake in it (even if it was just a holding for the sake of his pride).

It was in the process of all of this that I started learning more and more about the club scene in Dayton. When I published my story on the Total XPosure property, our recently elected mayor, Rhine

McClin, was being lauded for her extensive work in rebuilding Dayton by establishing new zoning laws that encouraged growth.  One new business, a glamorous looking “alternative” nightclub with hundreds of LED screens, light panels, and high-end marble flooring had recently replaced El Diablo lounge downtown. The door assistant had no problem bragging to me that the Mayor had private parties in the club’s VIP room every week. More digging turned up city documents mapping zoning changes in favor of the real-estate investment group out of Cincinnati in addition to the unopened issue of the Mayor’s “alternative” lifestyle. The story was starting to bleed back-door business deals when I started getting calls from the club-mogul’s lawyer… at my house. I wanted to break the thing wide open in gory detail and was absolutely dizzy with excitement over how much this was like everything I ever saw in the movies! Then, as so often happens, I started thinking about the bigger picture (in part because my mom REALLY didn’t like the direction any of this was going and my family was seeing and experiencing almost everything I was). I realized my focus as a reporter was always on finding trash, digging up as much of it as I could; writing about that was foundational to everything that ran front page.

I think it was Teddy Roosevelt in the 1900s that did a speech on the “Muckraking” of then-modern media sources.  This idea of publicizing scum became a new thought for me and one of, I believe, even more social significance than we realize. At the time, I’d been thinking it was a more valuable commodity in the information era to simply get “the truth” out and into people’s hands than to hold up anything positive or encouraging. “True journalism isn’t about the spin, it’s about the facts,” I thought. What a ridiculous little idealist I was fishing through the dumpster for my fact foundation. Edward R. Murrow was my hero because of his straight-forward reporting without bias. An irreconcilable concept, I now understand. Even the choices we make in what facts we highlight and what stories we publish shows bias and has the potential to vitiate people’s grasp of the truth.  My questions became even more personally significant when I started to study at Cedarville University. How much was I willing to invest in a life that could drag me down emotionally over time? There’s no question our most prominent media is focused on negative news and facts. I’d be steeped in it.

So I was thinking about some of this before I actually wrote a follow-up piece on the Total X property. It was an “Oh crap!” moment when I read Philippians 4:8. It’s that verse with a list of what you’re supposed to be thinking about.  “Whatever’s noble, whatever’s right, whatever’s pure… etc.” So I got the message but didn’t know what to do with it.

It took weeks of processing to make the paradigm shift mid-tango but it was a necessary part of growing up for me.  Here I’d been gunning for a mark that was in a completely different field from the one I needed to be shooting for. There’s some positive journalism out there but I honestly didn’t want that.  All I could envision was some cluttered, claustrophobic cubicle in a back office at the Christian Broadcasting Network or something. *shudder* Some of us just itch with irritation at the mere thought of blah-ness. If you don’t understand the feeling I’m describing here, imagine hundreds of pesky mosquitoes coming and going, sucking your life away from you because you’ve been sitting in the backyard for too long and either don’t see them or care enough to move. But I digress…

I made the choice not to run the follow-up story and resigned at the newspaper. I devoted four years to studying communication at Cedarville University and learned what I loved… how people think and respond to messages and how to study the Bible. Both are the most critical relationships we ever develop. I will always be a writer and journalist but it’s amazing how many choices fall under that heading. Making the right choice, one you can live with for your whole life, isn’t easy and requires a dependable resource as foundation. This is pivotal. If one little verse can change the way you think (as it should if you claim Christ), imagine how powerful the rest of those words can be.

“If you can't explain it simply, you don't understand it well enough." - Einstein
View all posts by Brittany →
This entry was posted in Life Philosophy, Questions, Renewed Thinking. Bookmark the permalink.
%d bloggers like this: